Paul Chavez has held many titles and roles during his nearly 30-year career at Cleburne ISD, but now it’s time for a change that is more his speed. Following four years as the head coach for Cleburne High’s softball program, Coach Chavez is now transitioning away from softball to focus on coaching cross country. 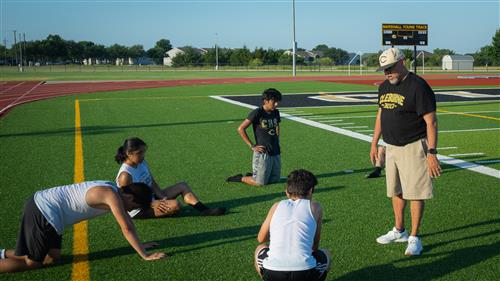 Chavez has a total of 12 years of cross country coaching experience under his belt, and is excited to enter this new role this year.

Since he started coaching in Cleburne, Chavez has often had to balance the responsibilities of coaching up to four different sports in a given year. Whether it is football, baseball, girls or boys basketball, volleyball, track and cross country, Chavez has done it all over the years. “It gets very busy,” Chavez said about his previous coaching experiences. “It's not just something you do in a single season,” he added.

But despite the workload he had, he still loves each and every sport he's coached. “I coach because of the kids and the passion I have for the sport, no matter what sport, and the game itself,” Chavez emphasized. “I feel that it’s important to teach our athletes the importance of putting in hard work, discipline, accountability, dedication, effort, and most of all heart!” Chavez believes that instilling these qualities in his athletes will prepare them for success in athletics, but more importantly, life as a whole.

In every sport he has coached, Chavez believes the athletes need a coach as dedicated to the program as they are in order to grow and succeed. “They want somebody to be here to coach them.” Chavez explained, “They want to get up and run and I’ll do it every day if they want to get up.”  That sort of mentality is what excites Chavez to continue to do just that. “It keeps me going too,” he said.

When asked why he chose to coach only cross country this year, he said that the sport had grown to be one of his favorites, partially because of the type of kid the sport attracts.

“You have kids that are dedicated, and responsible,” said Chavez. “Not everyone is willing to run countless miles a week and then turn around and race another 3.1 miles as fast as they can. It’s a different kind of kid.”

While he will be missed on the softball field, he believes he will be able to coach cross country much more effectively, and with a new grandchild around, he will be able to spend more time with his family. “I just felt like it was time to slow down and just enjoy the kids, coaching them, and teachin em.”