Following Coach Chavez’s decision to step down from the softball head coach position, 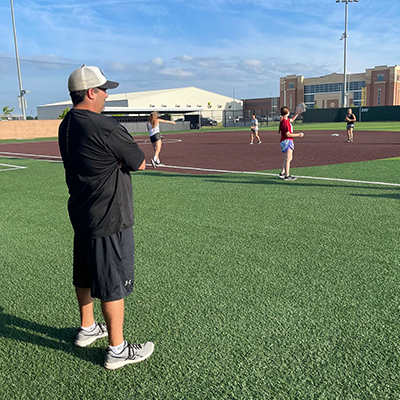 SPED Inclusion teacher and powerlifting assistant coach, Troy Culwell is taking over the softball program as the new head coach. A seasoned coach with 25 years of experience, Culwell says he is extremely honored and excited to be given this position. Culwell has three years of assistant coaching experience and will begin his sixth year as a softball head coach this upcoming season.

“I’m excited, I’ve coached softball for a long time, it's one of my true loves.” Culwell said. While Chavez was the head coach of softball, Culwell was coaching powerlifting, but following Coach Chavez’s decision to step down, Culwell was quick to show his interest in the position. “I definitely threw my name in the hat as fast as I could,” Culwell explained.

Culwell has coached just about everything but he fell in love with the endless strategic possibilities found within softball. He genuinely loves to study the game and the ways to be innovative within the game's rules. “There's a lot more to softball that can make the game basically pure chaos,” Culwell stated. “What I tell people is the long ball getting to the fence will get you some points but the small ball wins championships.” Culwell knows opposing teams will have to make many different defensive shifts to keep up with what's going on. He hopes playing in this manner will make the game a bit faster-paced and give our Lady Jackets a competitive edge against their opponents.

He wants his athletes to take ownership of their team. When meeting with the team, Culwell heavily emphasized that he wants them to feel like they run the team. Culwell said that on his first day he told the team, “This is half mine, half yours,” stressing that while he may coach the team, it is the girl’s team. Culwell wants the senior athletes to step up to the plate, and help teach the game. He believes the more experienced girls play a vital role by inspiring the younger players. “When they aren’t practicing they’re coaching,” he said. “They know what they're doing out there.” He says a lot of the players are already applying themselves to the betterment of others.

Culwell also aims to build up the softball program, similar to his work building up powerlifting. “We had 8 kids when I took over, now we are ranked 19th in the state and 8th in the region,” Culwell commented. “I take a lot of pride in that.” Now the powerlifting program contains over 50 kids, and is only growing. Culwell says he wants to recreate his results in powerlifting in his new position. “Now I'm hoping we can pack the stands, we’ll be doing all kinds of campaigning. We're gonna be doing some stuff to get people here.”

One such event you should mark on your calendar is ‘Culwell Vs Culwell,’ on the 22nd of February. “My daughter is the coach for Granbury, and I want to pack the stands because I want to teach my daughter a lesson,” he joked. “That's our big game before we get to district, it’s my daughter vs me, so we're gonna host Granbury here and we're gonna get after it.” The season itself begins in early February, so keep an eye out for big things coming from our Lady Jacket softball team in 2022.