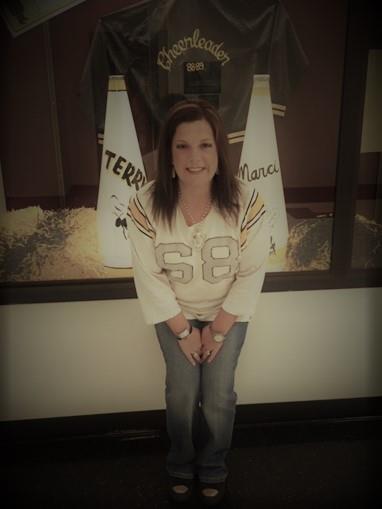 As a 1994 Cleburne High School graduate, I bleed black and gold! I knew that my ultimate goal was to return to my hometown to ensure students receive the same level of education as I and to continue the traditions of the Cleburne Independent School District.

Fun Fact--My class of ‘94 is responsible for renaming the football stadium “The Rock.” After a brutal game against Burleson in ‘92, we painted our sign to intimidate the Elks and let them know our team was solid as a rock--Welcome to the ROCK!

My post-grad journey began in the Fall of 1994, when I became a Red Raider. I studied at the College of Human Development at Texas Tech University. After two years, I returned to Cleburne and completed my BA degree with a minor in Spanish and English Language / Secondary Education as a Texan at Tarleton State University. I was so fortunate to have completed my Student Teaching under Robin Fort, an amazing mentor at Cleburne High School. I graduated in December of 1999. While at Cleburne High School, I served as Varsity Cheer Sponsor, TAAS test remediation teacher for English III for two trimesters, and in the third trimester I worked as a math teacher at Cleburne Middle School.

In 2000, Keene Superintendent, Wanda Smith, contacted me to teach at Keene High School as a 9th grade English teacher--my dream career. After three years under Kevin Sellers, I chose to come back to Cleburne under Principal Justin Marchel as a regular education 9th grade English I teacher. After two years, I began teaching English. I Pre-AP and continued until 2009.

I began working on my master's degree in school counseling after hearing Eli Wiesel speak at an event in Canyon, TX. I knew that it was time to complete my career goal and began my master's program in 2007 at Tarleton State University.  Principal Suzanne Keesee and Georganne Storm hired me as a counselor for both TEAM school and DAEP in 2009.

Dr. Miller and Ms. Keesee asked if I would join the Wheat team in the Fall of 2010. It has been an amazing journey! The teachers and staff at Wheat are families to me. We continue to educate the whole child together and create a safe, fun atmosphere for our students. I am so honored to serve our community and the late Mr. A.D. Wheat. Together, our staff daily overcomes adversity. We focus our attention on continuing to teach 21st-century skills to ensure life-long-learners.